Highly recommend a visit this week!  But hurry…(exhibition through June 12, 2010 – at Charles A. Hartman Fine Art, in Portland, Oregon).

Your time will be rewarded with some very nice prints from Mark Steinmetz‘, Greater Atlanta.  This is Steinmetz third photobook forming a visual trilogy about the area from which the series takes its name. South East, and South Central are two previous books related to the series and were released and printed through Nazraeli. With each copy, the quality is very high as can be expected, at least from everything I’ve ever seen coming from Nazraeli. 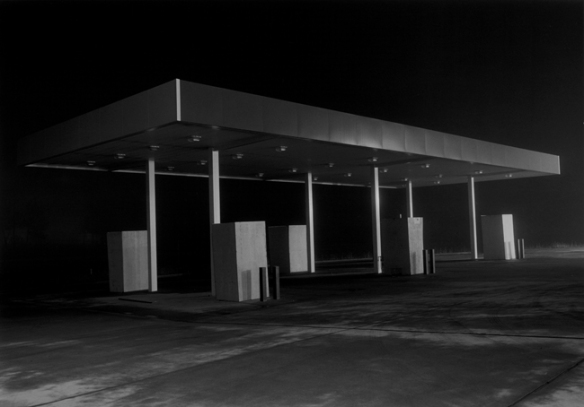 Having picked up my own (signed) copies of the books back in early 2009 and being able to look at them as a group for a while – it is terrific to finally get to see select prints up on the wall from the Greater Atlanta series. The prints are both stunning and modest – much like what I might project upon the people, landscape, and urban scenery that Steinmetz presents.

I have to say that having the books and being able to see how well the prints are represented in the book as compared to the prints on the wall means that for my limited means, the books are absolutely valuable and worthy representations.  I can’t stress enough how terrific it is to be able to look again and again and again through the trilogy to appreciate the photos. Each time something new seems to catch my attention.

In some ways Steinmetz’ Greater Atlanta series – recalls parallels to some work by Robert Adams – sensible, in the moment pictures, that seem to be almost too perfect in composition and with a similar sort of dignity and presence held still within the pictures. These are “candid” shots – it seems mostly that the subjects in the pictures clearly recognize a picture’s being made.

My best at describing what I like about the series (my projection) is this:  If,  I was trying to describing what my place might look like to an outsider, I’d do well to show them these books about my neck of the woods.  But, it strikes me that unless I told them where I was from before hand, the stranger might miss a lot about the locations of the pictures. Something I imagine that I probably am missing as an outsider to the south.

There is an interesting passage in “Beauty in Photography” the collection of essays by Robert Adams, published by Aperture. From the essay “Truth and Landscape”, where Adams is describing how making photographs has to be a personal matter, somehow the photographer has to be in the picture…

“…what we hope for from the artist is help in discovering the significance of a place. In this sense we would in most respects choose thirty minutes with Edward Hopper’s painting Sunday Morning to thirty minutes on the street with what was his subject; with Hopper’s vision we see more…there seem to be moments of revelation…there is a sense of comprehension.” – Robert Adams

Adams goes on a bit before this into the three elements landscapes should offer: geography, autobiography and metaphor – the intensity of which these three are present raises the artistic act of what we all “work to keep intact – an affection for life.”

Mark Steinmetz work on the Greater Atlanta series, as a group of photos, presents a lot more than just a picture of the “south” – and for this reason, I keep affectionately returning to the books.

Matt Niebuhr is an artist living and working in Des Moines, Iowa. He established West Branch Studio in 2012.